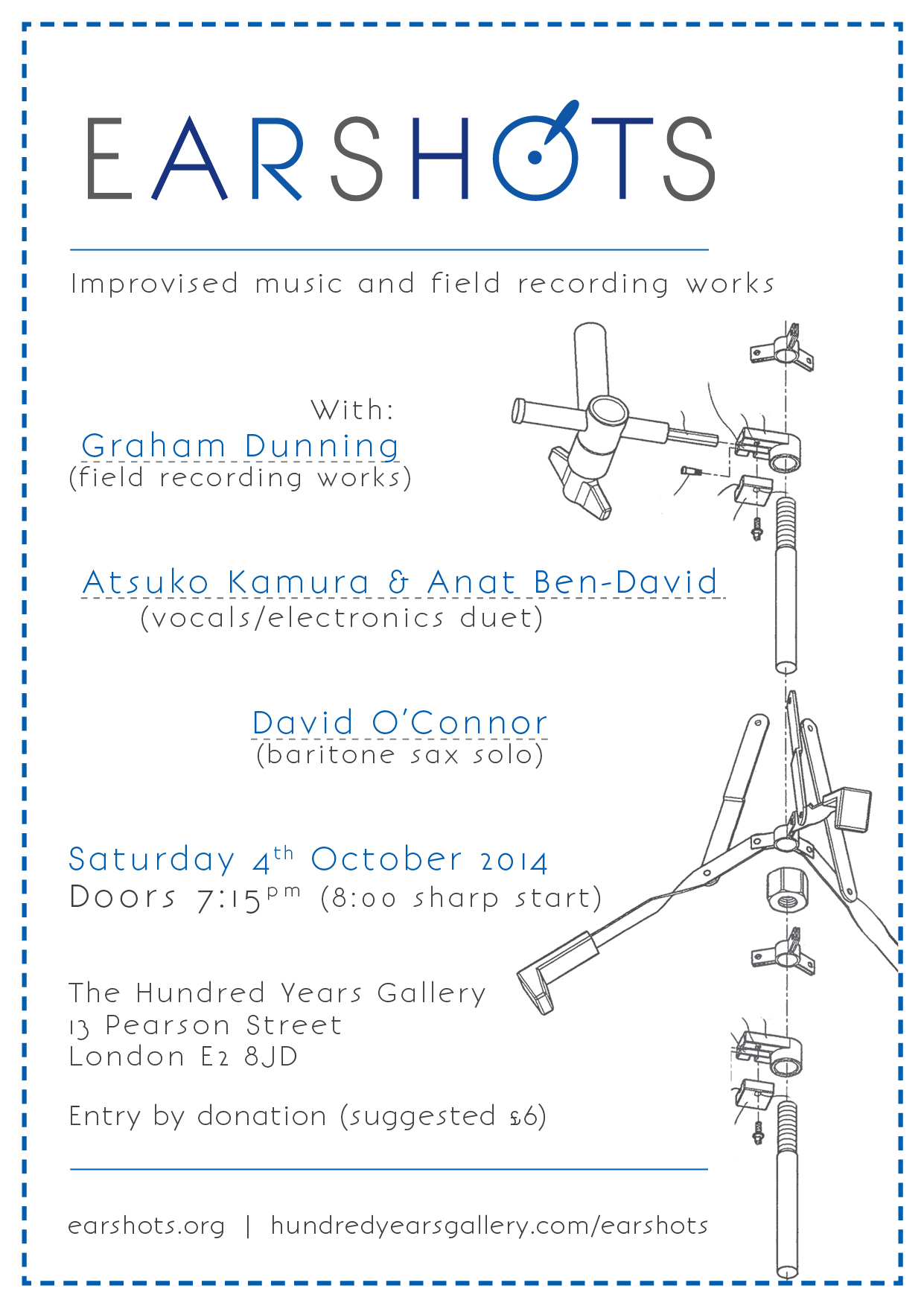 We are pleased to bring you the next Earshots installment on Saturday the 4th October. This time we are going a bit more (but not completely) electronic, with a duet from Anat Ben David and Atsuko Kamura (both using vocals and electronics); a solo set from David O’Connor (with some electrifying baritone sax sounds); and field recordings from Graham Dunning (with a special dub plate set).

It will take place as usual at the Hundred Years Gallery in Pearson Street E2, and the music will begin precisely at 8:00pm (doors at 7:15)

Entry is by donation, suggested £6

Singer Atsuko Kamura began her career by juggling roles as karaoke bar hostess and punk chanteuse in Tokyo, performing with the agit-fem Polkadot Fire Brigade and The Honeymoons. Her arrival in London led to a spell with the situationist pranksters Frank Chickens, duetting with Kazuko Hohki. In parallel she has explored improvisation with masters of the art like Tenko, Fred Frith and John Zorn, and in London alongside Charles Hayward and Lol Coxhill. 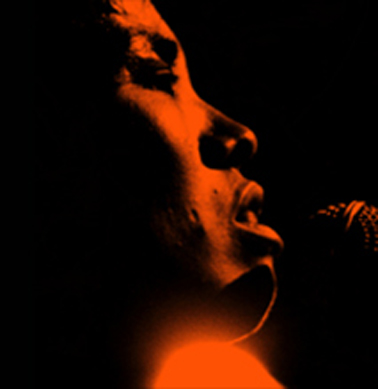 Anat Ben-David is a London Based Israeli born artist, whose work combines music, sound, video and performance. She is currently undertaking a PHD Program at Kingston University, where she is researching strategies and implications of the musical composition entering “Visual Arts”.  Since 2003 she has been a member and collaborator of both Chicks On Speed and Art pop performance group with Douglas Gordon ‘Art Rules Crew’ 2006-2008. Anat is an accomplished improvising vocalist, employing her trademark engagement between the voice/body and digital processes. She has worked with many London based musicians, taking the element of composition to its improvisational mode of spontaneity. 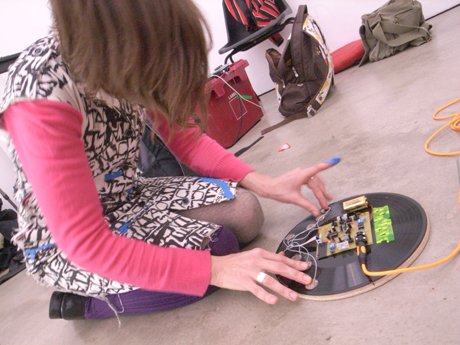 David O’Connor plays saxophones and the flute, and has every intention of continuing to do so. On this occasion he will soak the brick walls of the Hundred years gallery’s resonant basement; not with a flute, but with approximately 66-988Hz of liquid noise. 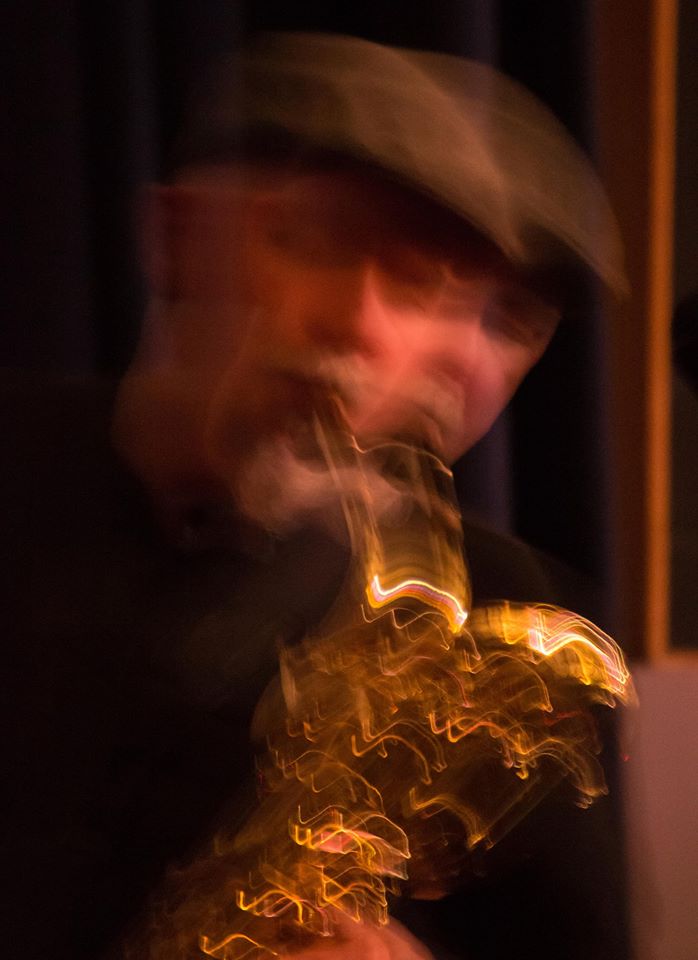 As an artist I make things in lots of different formats, but generally to do with either Sound or Found Objects in some way.

My background is in experimental music and this continues into the art I make and how I go about it. I use experimentation and play as a main part of my making process. I also like to set myself restrictions for my projects similarly to the way scientific experiments are conducted. Noise – as unwanted sound like record crackle or tape hiss – often features in my work, and a visual equivalent in dirt, dust or decay. I often try and repeat a visual process with audio, and vice versa.

I like to think about Time as a concept and its implications on our everyday lives: How people store their memories, in personal archives – photographs, audio journals, post-it notes – and what becomes of those archives. I find discarded objects interesting in themselves, for the stories that they suggest or that can be read into them. Collecting things has always held a fascination for me, both to do myself and to look at the way others do it. 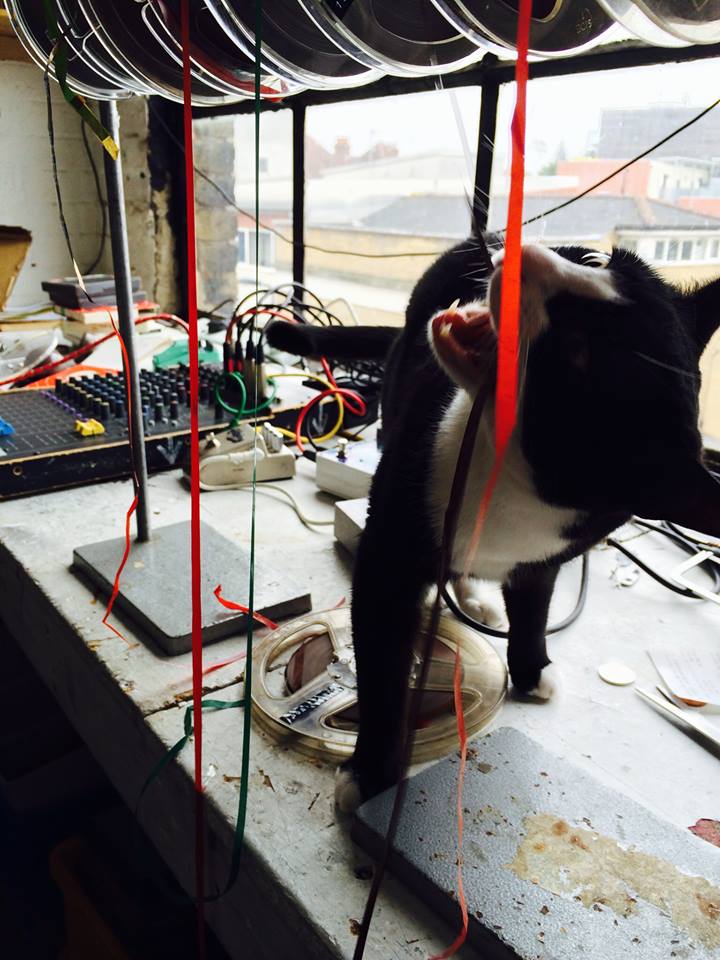